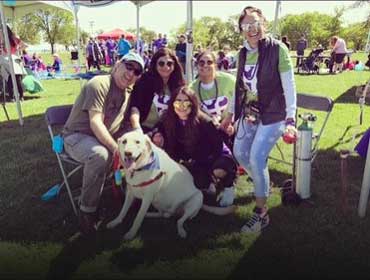 Cynthia is a fighter in the truest sense of the word. Born in Lebanon, the lack of cystic fibrosis awareness led to a misdiagnosis and ineffective treatments until she was 16 years old. Throughout that time, Cynthia learned she needed to advocate for herself.

In the summer of 2016, Cynthia traveled to Chicago to spend time with her uncle and aunt. Her uncle, a physician, watched as Cynthia’s health declined before his eyes. Following his urging to be seen by doctors here, Cynthia learned her lung function was just 22%--too low to take the newly approved drug, Orkambi, and too low to fly home.

After over a year of aggressive treatments, Cynthia’s health continued to decline. Her entire life she struggled to breathe, but her breaths became shorter and more difficult. Cynthia’s care team worked with her on possible treatment options and she was placed on the lung transplant list. After waiting for over a year and spending months in and out of the hospital, it would be easy for one to give up. But even after her priest visited her for what was expected to be the last time, she still fought to survive. Less than 24 hours later, she received the call she dreamed about. A pair of lungs were hers and she could soon breathe for the first time.

Cynthia embodies the true spirit of a fighter—she never gave up. She had no choice but to advocate for her own health and believe that one day she would be able to breathe like everyone else. Join the Cystic Fibrosis Foundation as we celebrate Cynthia’s fight for life.