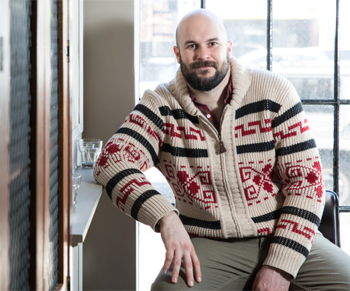 Wade Hall McElroy was born, raised, and attended college in the Southwest, graduating with a degree in sociology from Arizona State University. Living in NYC after college, he left a sales job at a startup and found himself drawn to the dynamic NYC hospitality community. Wade immersed himself fully in the craft of bartending, expanding upon his knowledge at places like The Standard, Rye House & The Dutch before leaving NYC to start fresh within the burgeoning cocktail scene in Chicago in 2011. In Chicago Wade was part of the opening team at Barrelhouse Flat where he met his business partner, Jeff Donahue, and began the path to start their company, Leisure Activities. While working at BHF, he joined the opening team of Wicker Park restaurant Trenchermen and connected immediately with it’s creators, Matt Eisler & Kevin Heisner of Heisler Hospitality. Alongside Matt and Kevin, they opened their first bar, Sportsman’s Club, in late 2013. Leisure Activities’ relationship with Heisler evolved and led to LA overseeing operations for the entire Heisler Hospitality group, including the openings of Pub Royale & Queen Mary, before partnering on our second bar, Estereo, in 2016. Wade has been named to Zagat’s 30 under 30 and alongside Jeff was named Eater Chicago 2014 bartender of the year.

It's always incredible to celebrate the best in Chicago Hospitality in a way that can better the lives of so many currently living with cystic fibrosis and it is humbling to be able to use my craft to help benefit such a great cause.