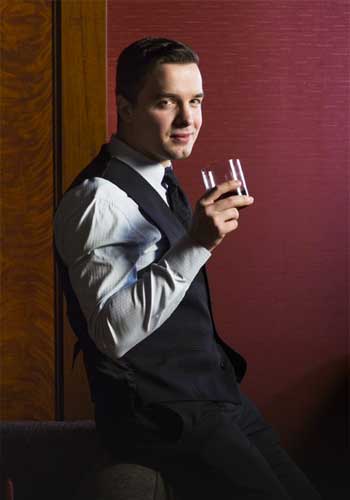 Vlad Novikov joined The Peninsula Hotel in March 2018 to lead Z Bar's cocktail and cultural programs. As the mixology-minded creative force behind the menu, he is responsible for crafting the one-of-a-kind beverages and elevated experiences that define and distinguish Z Bar.

Novikov started in 2014 as a bartender at the original Replay Beer and Bourbon in Lakeview. After a stint as bar manager and mixologist at Revival Social Club in Edgewater, he returned to LKH as bar manager at Replay, his role eventually expanding to Beverage Director.

Born in St. Petersburg, Russia, Novikov moved to the United States with his family as a child. He grew up in Palatine, a northwest suburb of Chicago, and attended Augustana College in Rock Island, Illinois, where he majored in chemistry and classics. His introduction to the bar scene was, like most college kids, through beer, but while his friends drank mass-market beer, he bought craft brews and took up home-brewing.

This led to his interest in spirits and cocktails and the development and refinement of his mixology style. Novikov takes a purposeful approach, showcasing the spirit, the interplay between two ingredients and the emotion behind the drink. "A cocktail needs to be good and elegant and delicious," he says.