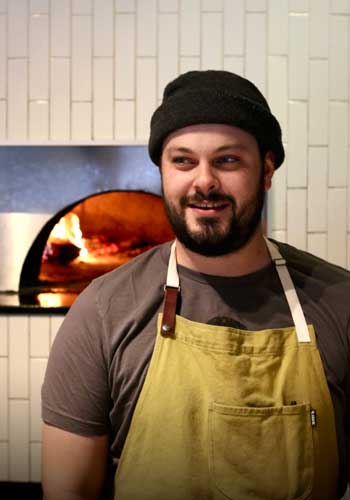 Growing up in suburban Frankfort, IL, Ross Henke first developed a passion for cooking through creating homemade meals with his family. Later, he began working in the kitchen of Naperville’s White Eagle Golf Club while pursuing a culinary degree at Joliet Junior College before becoming the chef de partie at critically acclaimed Sugar Toad under Chef Keith Willis, formerly of French Laundry. Ambitious to further his career in the hospitality industry, Henke dove headfirst into Chicago’s thriving restaurant scene in 2011. Over the ensuing years, Henke honed his skills in the kitchens of some of the city’s premier establishments including LM Bistro at the downtown Hotel Felix and in the West Loop at One Off Hospitality Group’s Publican Quality Meats and The Publican, working under the guidance of James Beard Award winning Executive Chef/Partner Paul Kahan.

In 2016, Henke teamed up with longtime friend Dan Salls to become the opening chef de cuisine at Quiote. Henke’s unbridled menu at Quiote is a mix of clever and inventive offerings that emulate the current culinary trends found in Mexico City while incorporating with sustainable ingredients sourced from Midwestern purveyors and fresh produce grown in Quiote’s rooftop garden. Opening in early 2017 in Chicago’s Logan Square neighborhood, Quiote was an instant hit, garnering numerous accolades including a Michelin Bib Gourmand in both 2017 and 2018, and the #4 spot on Chicago Magazine's “Best New Restaurant” list. Henke’s penchant for taking risks in the kitchen and passion for creating “cravable” dishes in novel ways earned him a coveted nomination for the Jean Banchet Award for Best Chef de Cuisine in 2017 along with the promotion to his current role as Quiote’s Executive Chef in 2018.