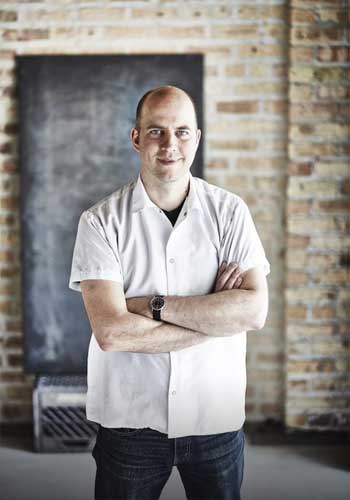 Although Perry Hendrix is at home in the kitchen, his first foray into cooking was by way of wine. Graduating from Miami University in Ohio in 1998 with a degree in Botany, Hendrix spent the last years of his education concentrating on wine production. He began professionally cooking in Asheville, North Carolina where he sought independent restaurants - such as Market Place and Richmond Hill - that were dedicated to local ingredients and traditional footways, effectively laying the groundwork for his culinary career. Next, Hendrix was lured west to Utah in 2003, where he led the kitchen as executive chef at The Metropolitan in Salt Lake City. He then spent time in St. Louis, Missouri, where he helped open the classic French-focused restaurant Brasserie by Niche as executive chef, and conceptualized their sister restaurant, Taste. Hendrix moved to Chicago in 2010 to take the helm at Custom House Tavern as executive chef, eventually moving into the same position for the opening of Maison in 2012. In June of 2013, Hendrix joined One Off Hospitality Group as Chef de Cuisine of James Beard award-winning avec in the West Loop. His penchant for fresh local ingredients and enthusiasm for wine make him perfectly suited for avec's core cuisine of Mediterranean-inspired dishes./p>