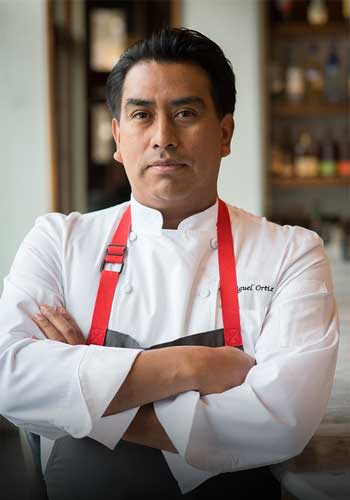 Miguel Ortiz's early interest in food began as a family affair. Following his mother who worked in catering, he developed an early penchant for food. Upon arrival to Chicago, he gained many skills including teamwork from Noyes, basic full-service restaurant from Swisshotel, fine-dining, and detail from Caliterra with Chef John Coletta, and how to open a new concept at Custom House with Chef Richard Camarota, whom he met at Cafe Spiaggia. Working closely with Ryan O’Donnell, Miguel fine-tuned his ability to run a kitchen while working as a Chef of Rustic House. Miguel then transitioned onto Gemini in Lincoln Park where he served as chef and today he works as a chef at Old Pueblo Cantina. Some of his favorite things about his job include creating menus, hearing positive feedback, and setting up a successful kitchen team. In his free time, Miguel enjoys playing soccer with his friends.