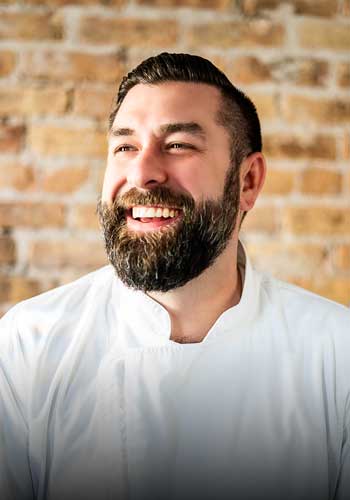 It was a lifelong interest in cooking and food service that led Chicago native Jonathan Meyer to pursue a career in his home city’s thriving culinary scene. As a chef, Meyer is committed to composing dishes with locally-sourced, eco-conscious ingredients, a passion that stems from his experiences as sous chef as well as his time on an organic ranch working towards self-sustainability in the heart of Costa Rica. His first solo venture was also in Costa Rica, a small, beach-side bistro boasting live music and open-air cooking every night. During his month long journey back home from Costa Rica, he would regularly stop at small, family-operated roadside stands for food through Nicaragua, Honduras and Guatemala, building his affinity for Latin American cuisine. When he returned to Chicago, he worked at Kroll’s South Loop as well as the Purple Pig on Michigan Avenue before becoming sous chef at the then highly-anticipated The Dawson, a position which earned him Michelin Star training in a high volume capacity. His next passion project was running his own kitchen as chef of Five Star Bar, which allowed him to stretch his artistic muscles and fine-tune his inspired approach to classic dishes and bar food.

Meyer became Executive Chef at Broken Shaker at the Freehand Chicago in 2015. Bringing with him an extensive understanding of the restaurant world from food trucks to high-end restaurants, it's no wonder that his street food-inspired menu contributed to making Broken Shaker one of the most popular eateries in Chicago. Two years later, Meyer joined his wife, Liz Pearce, on the opening culinary team at Beatnik, a West Town hotspot from Bonhomme Hospitality Group. Both of these more recent experiences opened his eyes and palate to more playful food preparations as well as experimental flavor combinations, evolving his personal cooking style into what it is today. This summer, Meyer rejoins his wife to open a new bar and restaurant in River North focusing on incorporating bold, international flavors into his New American cuisine.