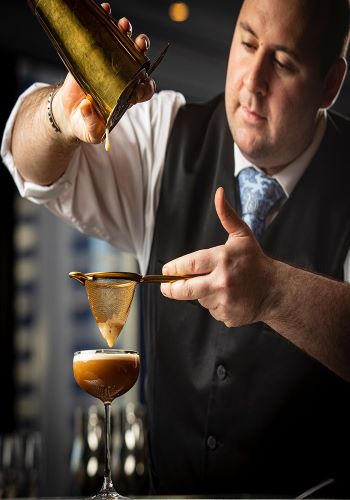 Wunderkind bartender Ian Rosenberg joins The Langham Chicago with a depth of expertise in cocktail development from behind the counter of some of the finest bars throughout Chicago and Orlando. A graduate of the University of Central Florida’s Rosen College of Hospitality Management, Rosenberg went on to bartend locally at the JW Marriott Orlando Grande Lakes and the Four Seasons Resort Orlando at Walt Disney World Resort, becoming highly versed in over 450 different kinds of wine and winning finalist for their North American cocktail competition in 2017. He began making his mark in the Windy City at Viceroy and Pendry Hotel by cementing his signature flair of standout service and whimsical concoctions. With a focus on food-based reference points such as seasonal herbs and Oriental spices, Rosenberg’s specialties include gimlets, palomas, and floral cocktails.

Situated on the second floor of the luxurious Langham hotel in an iconic skyscraper designed by Ludwig Mies van der Rohe that once housed IBM regional headquarters, Travelle is located along the Chicago River in the heart of downtown Chicago. A play on the word travel, Travelle is a casually elegant restaurant, lounge, and bar featuring seasonal American cuisine located at 330 North Wabash. Dishes feature fresh ingredients, utilizing their connection with some of the finest farms, ranches, and orchards in the nation. Alongside a carefully curated wine list, Travelle boasts a beverage program that highlights skillfully crafted classic cocktails. Influenced by the romance of the digital age, architect/designer David Rockwell of the Rockwell Group creates a modern environment that conveys history, sophistication and nostalgia into the 124-seat restaurant and 81-seat bar and lounge that overlook the Chicago skyline and river. For more information, please visit the website, follow the restaurant on Instagram (@Travellechicago), Facebook (@Travellechicago), and Twitter (@Travellechicago), or call 312-923-7705.

Travelle at The Langham