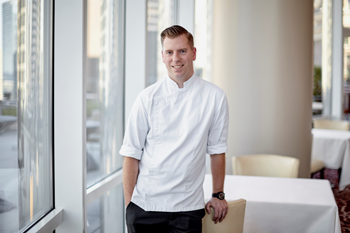 Born and raised in Iowa, Executive Pastry Chef Evan Sheridan has traveled throughout the country eager to continue his education in the culinary arts and advance his craft. Most recently, Sheridan held the position of Executive Pastry Chef at the AAA Five Diamond and Forbes Five Star hotel and restaurant The Umstead Hotel and Spa in North Carolina, where he oversaw pastry menu development for two restaurant outlets.

Sheridan’s career has always been driven by his desire to cook and to provide for his family. Although he began cooking for practical reasons he immediately fell in love with life inside the kitchen.

After some time working in savory kitchens and being attracted to new challenges, Sheridan took a job at a small bakery in Iowa, which preempted a 6-month education at The French Pastry School, made possible by a scholarship from the For the Love of Chocolate Foundation.

Upon completion of the program and ready to apply his expanded knowledge in a restaurant setting, Sheridan spent one year working for the one Michelin-star restaurant Boka under Chef Giuseppe Tentori before transitioning to a role with Jimmy MacMillan at The University Club of Chicago. After one year at The University Club, Sheridan moved on to The Inn at Little Washington where he was granted the opportunity to travel and develop his personal style and managing a team. Sheridan began building his own brand – learning from Patrick O’Connell and the elevated service that is offered by The Inn at Little Washington.

Not overly swayed by modern sensibilities, Sheridan is driven by contemporary techniques to enhance flavors. Through his tenure at the French Pastry School, Sheridan fine-tuned his practice to focus on precision and flavor while allowing for simplicity – playing with two or three ingredients that have complementary profiles. Sheridan’s trademark is working with seasonal ingredients such as fresh fruit – citrus, a particular favorite – creating a refreshing, light dessert.

Sheridan values the opportunity to join the two Michelin-starred Sixteen and work with Chef Thomas Lents in a city he loves. He values the impact of positivity and aims to live in the moment as much as possible. Outside of the kitchen, he spends as much time as he can with his wife and two children, exploring the city of Chicago.