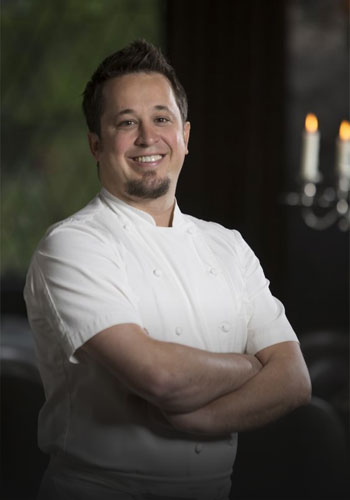 A Long Island native, Chef Danny Grant began cooking at a young age with his family in Scottsdale, Arizona. He moved to Chicago in his early twenties and began cooking for 2003 Food & Wine Best New Chef, Bruce Sherman, at North Pond. After four years as a sous chef at North Pond, Chef Grant left to cook abroad in Paris and attend The French Pastry School to round out his skills. He later came back to Chicago to serve as sous chef for NoMI Restaurant.

Chef Grant’s classic French training and forward-thinking vision work in concert to consistently turn out elegant dishes with sharply focused flavors. His career dropped into high gear in 2009, when he became executive chef for RIA and Balsan Restaurants at the former Elysian Hotel, where his respective French and European bistro menus earned him Food & Wine’s “2012 Best New Chef” award.  Chef Grant was the youngest US Chef to earn two Michelin stars in both 2011 and 2012 at RIA. While there, he also earned perfect four-star reviews from the Chicago Tribune and Chicago magazine.

In 2015, he joined What If…Syndicate. Now, the award-winning portfolio of brands – Maple & Ash, Mavens & Aficionados, 8 Bar, etta, and Aya Pastry – are the center of a growing hospitality group. Chef Grant always encourages a fun, lively atmosphere in both the kitchen and the dining room and is often found mingling with guests throughout dinner service.