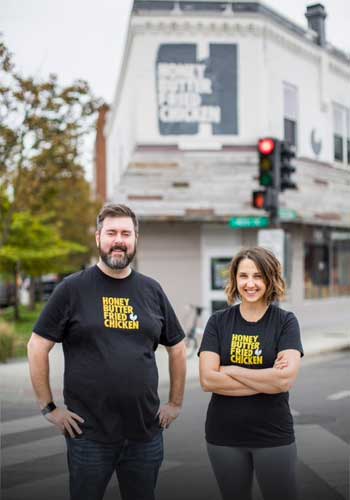 Christine grew up with a toe in the food world - as a child, she dabbled in cooking, baking, and gardening. She has worked in restaurants since she was 16, considering her numerous positions in FOH to be day jobs while working on “other things”. She never in a million years thought she would end up staying in the restaurant biz. (Clearly fate had other plans.)

She holds bachelor’s degree in Arts Management from Columbia College, and an associate’s degree in culinary arts from Kendall College. She cut her cooking teeth at Blackbird Restaurant and then went on, along with her culinary school rival/friend/business partner Josh, to found Sunday Dinner Club in 2005 and open Honey Butter Fried Chicken in 2013. Notable honors include a Chicago Tribune Dining Award in 2014, Starchefs.com Rising Star Chef in 2015, and Good Food Chef of the Year award from Family Farmed in 2017. Christine has worked closely on activist and community initiatives with Pilot Light, RAISE, the James Beard Foundation, Chicago’s Green City Market, The Mayor’s Task Force for Working Families, and Step Up Women’s Network, where she has been the chef chair for four years. She still contends that her greatest achievements are holding a handstand in yoga class, keeping her bay leaf tree alive, and coaxing her nieces and nephews to try new foods.

Christine has appeared on podcasts, radio broadcasts, publications and television, and has spoken extensively on running a sustainable and progressive business, open book management, and fair employment practices. She has written pieces for Chicago Magazine, Chicago Sun-Times, Crain’s Chicago Business, as well as tending to her own writing project, achefwhowrites.com.

Christine currently resides in Chicago, but her part of heart and soul lives in the mountains, deserts, and forests. When she’s not working on HBFC or SDC or a juggling a dozen projects, she can be found hanging out with baby goats, daydreaming, listening to music, and rationalizing yet another plane ticket purchase.

Josh really loves food. His college roommate describes eating with Josh as an exhilarating and exhausting experience. He loves fried chicken, cheeseburgers, steak tacos, pizza, fried rice, bucatini alla’ amatriciana, tomatoes and salt, ratatouille, and bread. Josh has worked in restaurants for over 20 years (with a brief detour as a 5th grade teacher in the South Bronx). He’s worked as a delivery driver, server, barista, dishwasher, cheesemonger, and cook. Josh has been the chef and owner (along with Christine) of the community dining club, Sunday Dinner Club since 2005, and the restaurant Honey Butter Fried Chicken since 2013.

He holds a bachelor’s degree in Political Science and English from the University of Wisconsin, a master’s of teaching from Pace University, and an associate’s degree in culinary arts from Kendall College. He, along with Christine, has received a Rising Star Chef award from Starchefs.com in 2015, the Good Food Chef of the Year award from Family Farmed in 2017, and was featured with a Chicago Tribune Dining Award in 2014. Josh has appeared on many podcasts, radio broadcasts, publications and television shows ranging from ABC’s “The Chew,” to the Wall Street Journal, to “Chef’s Night Out” on Vice.com. Josh has written and spoken extensively about improving working conditions in the restaurant industry including pieces with the James Beard Foundation, the Chicago Sun Times, Crain’s Chicago Business and the Creative Chicago Expo.

Josh was selected to participate in a James Beard Foundation Chef’s Policy Boot Camp, and as an active member of RAISE has spoken in congressional briefings regarding issues relating to restaurant wages and paid sick time. He was a member of the Mayor’s Task Force for Working Families which successfully spurred earned sick time legislation within the City of Chicago. Josh has been active with Chicago’s Green City Market for over a decade and has served as a chef/educator and member of the Pilot Light Advisory Board helping to educate children on making healthier food choices. He has also served on the James Beard Foundation Women’s Leadership Advisory Committee working to advance opportunities for women within the restaurant industry.

Josh is passionate about sustainability, ethical food sourcing, improving labor conditions in all aspects of the food community, and helping to make the world a better place to be. He loves to teach people how to cook and is always searching for more to learn as a cook. Josh lives in Chicago with his wife Rachel, and in his spare time often be found at Wrigley Field or mixing sourdough bread.