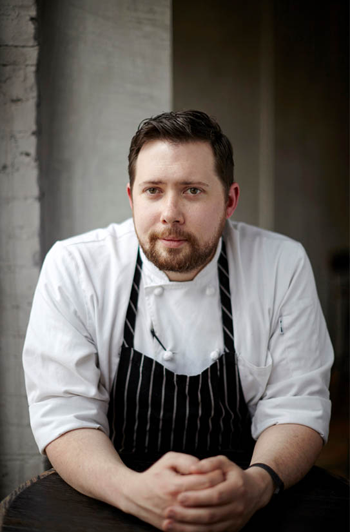 A native of Flint, Michigan, Chef Ashlee Aubin has been cooking in Chicago kitchens for more than a decade and guides the culinary innovation at Wood and Salero restaurants.

The culinary industry was not Ashlee’s initial reason for moving to the Windy City as he originally relocated to Chicago with the intention of attending law school. After a year of immersing himself in the Chicago food scene he was hooked. Ashlee joined the team at the Lakeview neighborhood restaurant Home Bistro followed by four years at Zealous in River North where he worked his way up to sous chef. When a chance opportunity to join Chef Grant Achatz at Alinea arrived, he jumped at the opportunity and proceeded to have the most formative culinary experience of his career.

After a year at Alinea as a Chef de Partie, Ashlee decided it was time to manage his own kitchen and opened Wood Restaurant in Lakeview. Wood continues to receive wide acclaim, including the Michelin Guide’s Bib Gourmand Award for three consecutive years from 2013 to 2015.

In 2014, the team from Wood joined together again to open Salero, a modern Spanish restaurant in the heart of the West Loop. The restaurant’s menu showcases fresh, local ingredients and Spanish traditions to create an inspired and authentic dining experience. Salero garnered immediate praise, including a glowing three star review from Phil Vettel in the Chicago Tribune for its subtle and refined take on Spanish flavors and its most recent accolade, one of Chicago magazine’s Best New Restaurants 2015.

Chef Ashlee also fosters the education and development of Illinois’ future culinary tastemakers by supporting the work of organizations such as the Spence Farm Foundation and Ground Up Chicago.