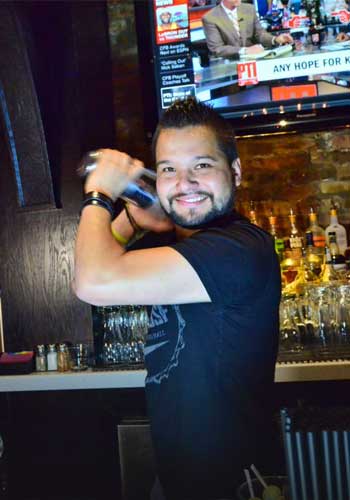 At the age of 29, Adolfo Calderon has done more than most people do before they turn 30. Calderon has coined himself to be the mixologist and bar manager for DineAmic Group's prospering and core concepts, Bull & Bear, Public House, and Prime & Provisions, and has just been named the mixologist of the new DineAmic Group concept coming in Spring 2017. Even at a young age, growing up in Guatemala, Calderon was interested in mixing flavors and liquids as he and his mom would make flavored teas and waters. Little did he know, this was the start of what his career would shape out to be today; mixology.

Calderon, turning his attention to the growing DineAmic Group, assists all DineAmic Group venues to stay on their toes coming up with new seasonal drinks and developing the beverage menus as well as overseeing the cocktail program. The acclaimed cocktailer grew his reputation for the boisterous restaurant group when he began competing in mixology competitions including at the Chicago Gourmet convention held in Chicago's Millennium Park. His consistent drive to build new ideas and his "tease the palate" ideology will keep everyone excited for sips to come and see what he has up his sleeves as they are revealed in the coming seasons.